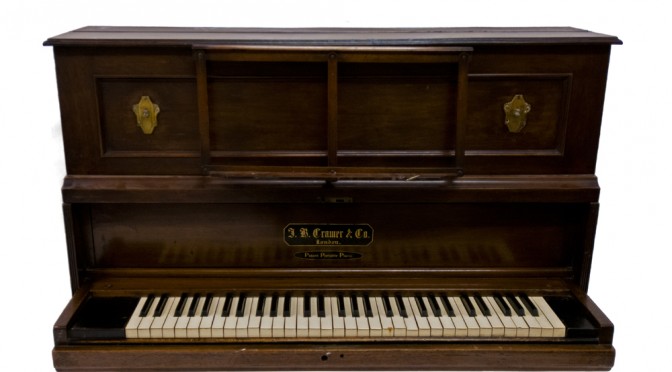 In its new display on domestic keyboard instruments, ‘At Home With Music’, the Horniman Museum has been making something of a piano of the type taken to the Antarctic by Robert Falcon Scott on his first expedition, the British National Antarctic Expedition (also known as the Discovery expedition) of 1901-4.

As I’ve been reading Scott’s account of the expedition, The Voyage of the Discovery, when I’ve been away from home (my copy – 2 vols, London etc: Thomas Nelson & Sons, undated – is conveniently pocket-sized), I thought I’d publish the references which Scott makes to the use of the piano, and events at which it must have been employed.

Describing life on board the expedition’s ship Discovery during their first winter, frozen into the end of McMurdo Sound just off Hut Point on Ross island, Scott wrote:

With the care of the ship’s work, the maintenance of the various [scientific] instruments in good working order, and many a stray task, it can be imagined that [Royds, our first lieutenant] has few idle hours. But one at least he finds – that immediately before dinner, when he goes to the piano and plays it, sometimes with and sometimes without the aid of the pianola; in either case we others in our various cabins have the pleasure of listening to excellent music, and feel that the debt of gratitude we owe to our only musician is no light one. This hour of music has become an institution which none of us would willingly forego. I don’t know what thoughts it brings to others, though I can readily guess; but of such things one does not care to write. I can well believe, however, that our music smooths over many a ruffle and brings us to dinner each night in  that excellent humour, when all seem good-tempered, though ‘cleared for action’ and ready for fresh argument. (Vol I, p. 274)

Although the expedition was housed on the Discovery, they built a hut on Ross Island to serve as a storehouse and additional accommodation.

The hut also had other uses:

The idea of requisitioning our large hut as a place of entertainment had occurred to us early in the winter, and in this connection it was first used for a concert given during the first week in May [1902]. Royds, who took much pain in getting up this function, arranged a long programme  in order to bring forth all the available talent; but although we were not inclined to be critical of our amusements, one was fain to confess that our company had not been chosen for their musical attainments. (Vol. I, pp. 328-9)

Undeterred by this apparent lack of talent, the expedition’s members proceeded to put on a play in the hut, renamed the ‘Royal Terror Theatre’ (after one of the two mountains on Ross Island) for the occasion, on 25 June 1902. Scott quotes from his diary:

Presently the curtain rolls up and discloses Royds at the piano and the first singers in true concert attitude. We have a duet, followed by several solos, and occasionally a rousing chorus, when one rather fears that the roof of the Royal Terror Theatre will rise. On the whole the first part passes decorously …. (Vol. I, p. 330)

The success of the play led to further plans for entertainment:

… later on, … Royds undertook to organise a nigger minstrel troupe, and towards the end of the winter succeeded in getting them together and in rehearsing their various parts through many a cold hour spent in the freezing theatre.

(Needless to say, the terminology is Scott’s, reflecting the culture of his day and the popularity of ‘minstrel troupes’.)

On August 6 [1902], the date fixed for this performance, we were in the midst of a cold snap, but although the temperature had fallen below -40º [F, = -40º C], it was decided that the programme should be carried out as intended.

Scott again quotes from his diary:

To-night the doors of the Royal Terror Theatre opened at 7.30, and as the temperature was -40º and there was a strong wind, everybody did his best to make a record in reaching it. Even inside the temperature was well below zero; I wonder how the ordinary theatre-goer would appreciate sitting in the stalls under such conditions. …

As everyone knows, a nigger minstrel performance consists of songs and choruses, between which the ball of conversation is kept rolling amongst the various minstrels in the form of weighty conundrums, which, after numerous futile attempts from others, are usually answered by the propounder himself. …

To-night the choruses and plantation songs led by Royds were really well sung, and they repay him for the very great pains he has taken in the rehearsals. Of course in the choruses of “Marching through Georgia,” “Golden Slippers,” “Suwanee [sic] River,” and such songs, the audience felt that they must also “lend a hand,” and did so with such a will that the rafters shook. (Vol. I, pp. 331-3)

There’s a picture of the minstrel troupe in the online catalogue of the Scott Polar Research Institute’s picture library.

The piano also featured in the expedition’s second mid-winter day celebrations, on 23 June 1903. Scott quotes from his diary:

After dinner we felt we must have some novelty, so someone suggested a dance. The table was got out of the way, Royds went to the piano, and the rest of us assembled for a set of lancers, one of the most uproarious in which I have ever indulged. Then came cock-fighting and tugs of war, and altogether we had as festive an evening as we have ever spent. (Vol. II, p. 182)

I’ve also been reading Reading George Seaver’s 1933 biography of the expedition’s assistant surgeon, vertebrate zoologist and artist, E. A. Wilson (Edward Wilson of the Antarctic: naturalist and friend (John Murray: London, 1933)). I was interested to discover there a little more about Royds as a musician. Presumably basing himself on Wilson’s diaries, Seaver described how:

The pianola was in constant use except when Royds, the only musician, played from the great composers (Wilson delighted in such music – Chopin especially – and constantly refers to Royds’ playing with gratitude), or when concerts were arranged at which these two friends invariably sang duets. (p. 96-97)

I must admit that the references in both sources to the pianola are confusing – the Horniman’s Cramer portable piano does not, as far as I know, also work as a pianola. I’ve had a look through photographs from the Discovery expedition which have been published online – but alas, I’ve not been able to find one showing the actual piano or a pianola used by Captain Scott on this occasion, which might help clear the matter up.