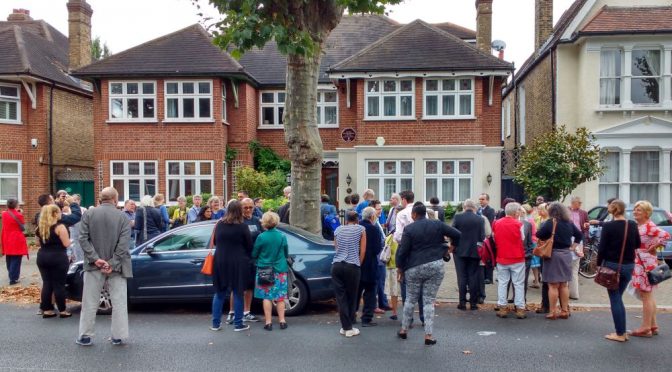 Further to my piece on Captain Colbeck’s eggs, I was delighted to be invited to the unveiling of a plaque in memory of William Colbeck on the site of his old house at Inchmery Road in Catford, south-east London. Organised by Sandra Margolies, Colbeck’s grand-daughter, the event was attended by many of Colbeck’s descendants – as well as relatives of his former shipmate on the SY Morning, Alfred Cheetham, and of E. A. Wilson, the zoologist and junior surgeon on the Discovery expedition and chief of the scientific staff on the Terra Nova expedition.

There were speeches by Kate Richardson, of the Culverley Green Residents’ Association; Donald Lamont, chairman of the UK Antarctic Heritage Trust; and Sir Steve Bullock, Mayor of Lewisham. The plaque was ‘unveiled’ by Kevin Fewster, Director of Royal Museums Greenwich. Everyone was given copies of the burgee of the Pirate Yacht Club, Bridlington, taken by Colbeck on the Southern Cross expedition,  to wave.

The event concluded with a small reception, at which a rather spectacular cake, decorated with penguins (identified by David Wilson as baby Emperors and adult Gentoos), was served.