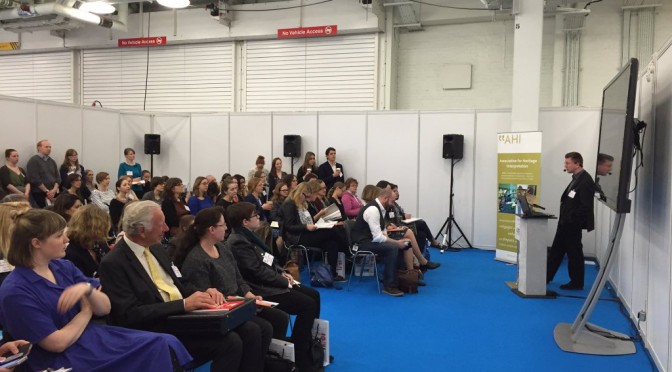 I gave a talk today at the Museums + Heritage Show, about a major collection review which took place at my previous employer, the Horniman Museum , between 2012 and 2015.

The whole talk is available elsewhere on this site, albeit rather buried, because I’ve treated it as a publication rather than a post – fair enough, given that it’s a few thousand words long. But I thought a quick summary might be interesting for those of you who don’t want to read the whole thing.

The talk described the collection review which we carried out in the Horniman between April 2012 and March 2015, and also contained a list of the lessons we’d learnt along the way. Although the project was well-funded through Arts Council England’s Major Partnership Scheme, I think many of the lessons we learned are transferable to museums of more-or-less any size.

The review was part of the Collections People Stories project, which set out to uncover the range, scale and importance of the Horniman’s anthropology collections. We based our work on lessons learned during a review of Oceanian collections in the preceding six months.

Having appointed a team , comprising

and found working space for them, we began by reviewing the accession registers, flagging any discrepancies between them and our collections management system, Mimsy, and entering any records not yet in the system into Mimsy. The teams ended up checking 40,105 register entries against 73,832 database records in just 17 weeks.

We also appointed an archive officer to review the object history files, listing their contents and the people, organisations, places and cultures they were related to, as well as identifying duplicate people in the database and writing biographies for the most important. He created 1,719 new archive records over 25 weeks from November 20102 to April 2013.

Once the registers had been checked, we concentrated on setting up for the main collection review, which planned to look at 30,000 items in our anthropology collections. We

We divided the review teams into two teams of two, with the collections assistant providing assistance, cover for absences, and helping with follow-up work, as required. We soon found the teams worked best as pairs, doing some tasks in parallel and helping each other with others, rather than working completely as individuals.

Our choice of objects was based upon their arrangement in the stores, which in the Horniman is by type of object, whilst also taking into account the practicalities of object handling and working space.

Our initial plans for what to record proved to be over-ambitious, and we gradually reduced the depth of what we recorded, although we also found some information that could be checked and recorded comparatively quickly which made up for the reductions in other areas. In the end, we upgraded the following information about the objects:

Our photographic setup for the review teams was quite basic, but when combined with training and support from our photographer, scripts to manage colour correction and post-processing, and an image processing tool provided by Selago Design, Mimsy’s developer, we found that the teams were able to take a large number of very good reference photos of the reviewed objects.

The photographer continued o take professional-quality photographs of anthropology objects throughout the review, assisted by several photography volunteers. We also took the opportunity to photograph some of our largest and most awkward objects, captured in this time-lapse video:

During the review, we published all the objects that had been reviewed on the web, whilst the review teams tweeted about what we were doing, and started a Tumblr blog, In the Horniman, which attracted over 37,000 followers.

We reported progress through weekly checkpoint reports to all stakeholders, and monthly highlight reports to the project’s steering group. The graphs we produced for these indicate the progress we made – but also the extent of the work identified by the review which still needed to be done. We used student placements to help with marking, measuring and repacking; budget surplusses to pay for short term staff to tackle work on data backlogs; and project staff to work on problem images and reconciling duplicate database  records.

But there were other areas where we failed to make any impact on work identified by the review. And despite making a good start on much of the follow-up work, there was still a great deal left to be done at the end of the project.

We made sure to hold regular meetings of the review teams and other stakeholders, and also celebrated milestones in various ways, including some very serious baking, and awaydays to look at other museums and the work they were doing.

The end result was a highly successful project: between the teams and the curators, we reviewed or signed off over 32,000 items by the end of the project, took over 69,000 photographs, did a huge amount of follow-up work, significantly increased our online presence, attracted a significant social media following – and won an award along the way.

What were the secrets of our success? These are the top tips which we would pass on to other museums:

And if I were to boil these down to only two, they would be:

You can see a bit more about the Collections People Stories collection review and the broader project in this video produced by the Horniman in July 2013:

I hope that the Horniman will be able to write all this up into a proper report and publish it.  But now that I’ve written and delivered this paper, I’m going to turn my attention to the talk that I’m giving with Angela Kipp of the Technoseum in Mannheim, in one of the CIDOC sessions at the ICOM 2016 conference in Milan in July. We’ll be speaking about ‘Spreading the word: explaining what Museum Documentation is – and why it’s important’.

And within the next few months, I hope to try and pull together some thoughts about my time at the Horniman, and what faces me at the National Gallery.