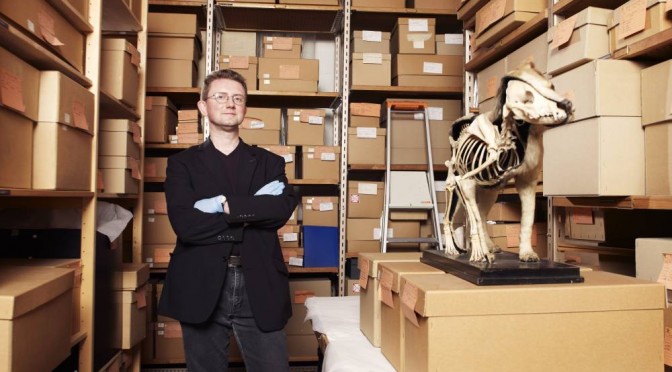 A few weeks ago, I was standing in the Pot Room, accompanied by a dog who was half skeleton, half fur, being told by someone I’d never met before that I was losing it.

Alas, this is not a sordid tale of fast living at the Study Collections Centre. The Pot Room is where the Horniman Museum stores its reserve collection of ceramic pots; the dog was Patches, one of our double-prep taxidermy mounts; and the person I’d never met before was the photographer Michael Donald: I was having my picture taken for the Museums Journal, the monthly publication of the Museums Association. I’d been interviewed a few weeks before by John Holt, along with several other people working in museum documentation. The resulting article, a series of condensed interviews, was published in the May 2014 issue, and is now available online.

Each of the interviewees gave a different slant on the business of museum documentation – in my case, the slant seems to have reflected my preoccupations at the time of the interview. I was in the middle of trying to standardise data in a very inconsistent database before uploading it to our Mimsy XG collections management system, and worrying about the need for significant data updates and corrections being thrown up by our Collections People Stories review of our anthropology collections, so I focussed on quite technical matters: questions of data quality and backlogs in cataloguing and documenting collections.

Brittany Harbidge and Shona Elliott both emphasised cataloguing and the importance of documentation for enabling museums to find and account for their collections. The role that day-to-day documentation such as loan records play in recording an object’s history was significant for Nico Tyack.

Both Nico and Gareth Salway focussed on the importance of collections data as an asset, and the need to find ways of making it available; Gareth also spoke about the way that documentation staff can sometimes end up running more general collections management tasks.

For Jude Dicken, the emphasis was on knowledge management, cutting across access, collections care, collections development, and information – and making all that data as widely available as possible through a variety of online channels (‘create once, publish everywhere‘).

One of the themes that came out of the article was a degree of dissatisfaction with the label ‘documentation’: the kind of work done by us documenters (or documentalists – it’s interesting that there’s no settled name for the people who do documentation, unlike, say, conservators or curators) might be better understood if it were labelled ‘collections knowledge management’ or ‘collections information management’.

This lack of a more general understanding of documentation is something that’s been worrying me over the past few months – I wrote something about the problem on this site a few weeks ago. And since then, I’ve produced a much longer discussion of the issues,
‘Museum documentation: a hidden problem or something to shout about?’, for the Registrar Trek blog (also available in German). It’s a long post (a very long post for a blog), and although I would of course urge you to read it, I’ll try and summarise it here.

The post stems from a discussion I started on Collections Trust’s Collections Management group on LinkedIn (you need to be part of the group to see the discussion), asking why documentation often seems to be invisible when museums talk about what they do – and asking for Twitter-length definitions of why it’s important.

This led to a conversation about whether museums should do more to publicise the infrastructure which lies behind public outputs like learning programmes and exhibitions. Opinion was divided, although I’ve come done in favour of raising the infrastructure’s profile: if you don’t know something exists, how can you fund it? (And this is perhaps one reason why people spoke of their frustration at the label ‘documentation’ in the Museums Journal article.)

I also looked at the tendency to see documentation as a problem – often as a backlog that needs to be cleared. Backlogs arise for various reasons, but often because information about collections has travelled through a variety of formats before reaching its current home in a computerised collections management system, with opportunities for errors and kludges to corrupt it each time it changes format. This is often exacerbated by lack of resources to do the job properly, or correct the problems.

Like many roles in museums, documentation is a comparatively new specialisation, emerging over the last 20-30 years as systems for recording and managing collections have become more complex and computer-based. The problems caused by hiving it off into a separate area have been exacerbated by some museum staff’s lack of understanding of the limitations of computerised systems. This is a symptom of a division between the types of person generally drawn to museum work, and those of us who find ourselves specifically drawn to work in documentation.

I ended with a repetition of my plea to try raising the profile of museum documentation via Twitter, asking everyone working in museum documentation who has a Twitter account to tweet what they’ve been doing each day, and – crucially – why it’s important, using the hashtag #MuseumDocumentation. You can see a feed of the resulting Twitter stream on the right of this page.

Hopefully, between the Museums Journal article, the Registrar Trek blog post, and an article on documentation which I’ve written for Museums & Heritage Magazine which is still to be published, we’re beginning to see documentation’s importance understood within museums. The next step is to try and raise it amongst the public and potential funders and sponsors.

Update, 1 August 2014: my article for Museums & Heritage Magazine has now been published, and is available here.