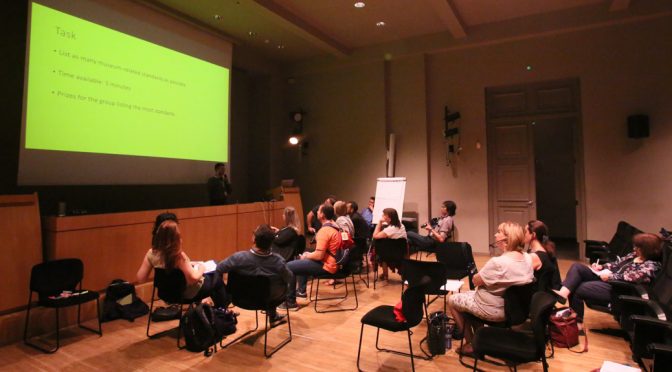 I’ve just (well, the month before last – but in terms of my writing on this site, that counts as ‘just’) got back from Tbilisi, the capital of Georgia, where I was attending the 2017 annual conference of CIDOC, the international organisation for those working in museum documentation.1 As well as a fascinating range of papers from many countries, visits to Georgian museums (and opportunities to sample Georgian wines), I facilitated a couple of sessions dedicated to the CIDOC Documentation Standards Working Group (DSWG)’s Encyclopaedia of Museum Practice – ably helped by my co-facilitators, Maija Ekosaari and Jan Behrendt, and filling in for the DSWG’s co-chair, Jonathan Whitson Cloud.

The Encyclopaedia is, I think, a worthwhile and interesting project.  Its basic aims (taken from its website) are simple: to define concepts used in museum practice, and the differences between concepts (and the terms used for them) in different languages, acting as a stable reference for such concepts. So far, so useful; but it is more ambitious, aiming to provide a central repository of links to standards, guidelines and terminologies – which anyone working in museums, faced with the plethora of such documents, and then trying to find them online, will welcome with open arms.

Just as importantly, the Encyclopaedia is set up as a wiki: once they are registered, anyone can edit it. This is crucial to the Encyclopaedia’s effectiveness. Museums are an international phenomenon: ICOM, the International Council of Museums (and CIDOC’s parent body) has 119 national committees, representing the organisation in their country. And so the Encyclopaedia is truly multilingual: the software used, Tiki, has no concept of a base language: entries can be created in, and translated into, any language supported by the software. True, English dominates the content at the moment – but that is only because the bulk of the Encyclopaedia’s administrators have until now been native English speakers. In due, course other languages may come to the fore – indeed, we’d be delighted if they came to  dominate the Encyclopaedia.

So what were my colleagues and I doing for the Encyclopaedia in Tbilisi? Basically, trying to further its unspoken aim, to create as much relevant content as possible in as many languages as possible. To do this, we organised two activities.

The first, in the DSWG’s session within the conference, was a brainstorming session to collect the names of as many museum-related standards as possible, so that we could use these to seed the Encyclopaedia with skeleton entries as a spur to filling them with more detailed information. Over 10 minutes (and spurred on by the promise of prizes – gold stars and ‘I Love Museums’ badges), participants came up with 58 different standards, of which 48 had not yet been entered into the Encyclopaedia.

(Incidentally, I’ve been unable to find a few of these online. Do you recognise the following standards from their sometimes partial descriptions?

If so, please drop me a note with their formal title and , ideally, a web link in the comments box below, and I’ll get them into the Encyclopaedia.)

That evening, I added skeleton entries to the Encyclopaedia for as many of these standards as the hotel WiFi would let me, in preparation for the workshop planned for the following day: an introduction to editing the Encyclopaedia, followed by a communal editing session. Whilst I managed to show people how to register to use the wiki (and we added several new users), and how to create a basic entry and add some straightforward wiki markup, in the end the temporary conference WiFi wasn’t up to supporting multiple editors, so we had to abandon the planned editing session.

However, we did agree to try and meet up online for a couple of hours and work together on the Encyclopaedia.  The meeting is planned for Saturday 18 November and, if you’d like to  join, I’d be delighted to see you there. The time is still to be confirmed – see this Doodle poll if you want to join in, and let us know when would work for you.

Before you can edit the Encyclopaedia, you’ll need to sign up as an author on the wiki. To do this,

I hope that, like me, you think the Encyclopaedia of Museum Practice is a worthwhile cause, and will join me and the other editors in developing it so that really does become a truly international, central, stable source of information on all matters relating to museum practice – including, of course, museum documentation.

We’re running another online editing session for the Encyclopaedia on Saturday 17 March. If you’d like to join in, please register as a contributor to the Encyclopaedia using the information above, and let me know the best time for you in this Doodle poll.

4 thoughts on “The Encyclopaedia of Museum Practice”