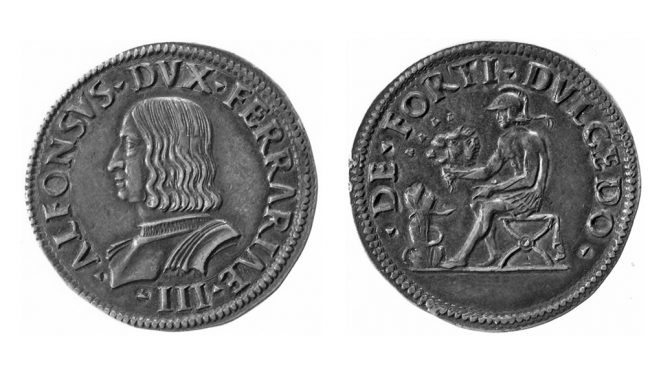 A few months ago, I received an email via the contacts page on this website from Franco Saetti, an Italian numismatist, asking me to send him a copy of an article [5 MB PDF] I had written many years ago, discussing a letter which describes a group of people looking at, and discussing, newly-minted coins in Bologna in 1505.1

I scanned a copy of the article and sent it to Ing. Saetti. I was delighted to receive a packet from him a few weeks later, containing a couple of offprints of his own which discussed the same coins as my article.2 I read Ing. Saetti’s articles with interest, and they led to some further thoughts about my article.

This discussed a letter written on 19 June 1505 by the Bolognese notary and author Giovanni Sabadino degli Arienti (c. 1443-1510) to Alfonso I d’Este, who had just succeeded his father Ercole I as Duke of Ferrara. Arienti described looking at and discussing coins which Alfonso had just had minted and sent to Bologna, with Alfonso’s half-sister Lucrezia d’Este and others.3 I was able to identify the coins discussed as:

A gold double ducat of Alfonso’s, again showing the beardless Duke on the obverse, and Christ and the Pharisee’s agent with the inscription Que sunt Dei Deo:6 CNI no. 6, known to have been commissioned from Giovanni Antonio da Foligno.7

I pointed out that the letter is unusual in describing people looking at coins, the form of representation that was probably seen by the most people in early sixteenth-century Italy. Although the terms in which Arienti discussed the representations they carried were unremarkable (people depicted as if they were alive, comparisons with antique art), they are informative.

The letter suggests that coins were seen as accurate likenesses of the rulers whose features they bore, which they literally circulated amongst the populace; and so they provided opportunities to show one’s attitude to the ruler. Arienti in fact misdescribed the testone, saying that it showed Hercules and the Nemean lion, imagery more appropriate to Alfonso’s father, Ercole (Hercules) – and this suggests that Alfonso was also using his numismatic image to emphasise the continuity of his new rule with that of his father, an impression reinforced by the similarity of the two dukes’ portraits on these early coins of Alfonso’s.8

Arienti’s letter also shows that people paid attention to the more symbolic side of coins, drawing attention to the inscription on the double ducat which, to those able to identify the Latin quotation from the Bible, was a clear exhortation to pay one’s taxes – although his misidentification also shows the potential limits of even a more educated viewer’s understanding.

And the letter tells us, too, something about the circulation of newly-minted coins between cities and in the aristocratic circles in which Arienti was able to move. Arienti himself used the coins as a pretext to flatter Alfonso, from whom he hoped for preferment, having served and been aided by his father from time to time; in this, he was unsuccessful, although he did fare better with Alfonso’s sister Isabella d’Este, Marchioness of Mantua.

Finally, I suggested that a reference in Arienti’s De triumphis religionis to a gold coin of Ercole I d’Este’s depicting the Hydra on the reverse9  might indicate an unknown striking of a design known only as a silver testone / quarto, or a copper proof (CNI, nos 17-21).

Interestingly, Arienti does not describe the metals in which the coins he first saw had been struck; the fact that he explicitly refers to the copies in the possession of Lucrezia as being in silver and gold might suggest that the first ones he saw were not minted in those metals – although the only known circulating coins with the designs he describes are in silver and gold. I hadn’t considered this possibility in my article, but the many copper ‘proofs’ which Ing. Saetti describes in his 2015 article certainly reinforce the likelihood that Arienti may have been looking at coins in a base metal, probably copper. Relevant copper coins included by Saetti in the catalogue at the end of his article are:

But what were these base-metal versions for? According to Ing. Saetti, although we know that proofs of coins were struck in renaissance Italy, we don’t always know what metal they were produced in, nor do we know whether they were usually produced in copper.13 Saetti adduces as evidence a letter from the Holy Roman Emperor Maximilian I to Bernhard Behaim at the Hall mint, dated 15 November 1513, which discusses the minting of 200 copper copies of a silver Guldiner, suggesting that these might have included Schaupfennige, ‘display coins’, what Saetti calls ‘representational medals, unlike [those in] gold, widely distributed’. He also notes that striking these copies from the dies used for the silver coins would have been cheaper than casting them, whether using the lost-wax process favoured by the Italians, or boxwood or stone models in the German fashion. In short:

One can therefore conclude that the pieces in copper from the series examined [in Saetti’s article] should, when there exist corresponding examples of coins issued in gold or silver, in the majority of cases be considered as medals, for display or for normal circulation.14

Ing. Saetti’s identification of these copper versions of coins issued in precious metals as items made to be sent out to interested parties would, as I mentioned earlier, reinforce the possibility that the coins that Arienti saw first were base metal (probably copper) versions of the more precious coins which had been sent to Lucrezia d’Este. As Saetti says, it is entirely understandable that we have records of rulers following the coining of their numismatic portraits with interest, as they were an effective form of propaganda which distributed their likenesses inside and outside their dominions.15 Whether disseminated in precious metals as currency, or in base metals as ‘display coins’, these could provoke the kind of discussion recorded by Arienti in his letter.

On another track, I was interested to see that, in his earlier article, Ing. Saetti charts a change, within coins issued in certain Italian mints over the period c. 1400-1520, from what he calls the ‘late-gothic’ art of Pisanello and his school to a growing interest in the convincing depiction of pictorial space.16 Here I would disagree with Saetti, but only in his characterisation of Pisanello’s art. I would argue that, if we consider ‘renaissance’ art to be characterised by a renewed interest in the art of antiquity, then the work of artists like Pisanello, which relates closely to antique and all’antica descriptions of works of art, should in fact be seen as quintessentially renaissance rather than gothic.17 This is not to claim that Pisanello should be associated with an emphasis on illusionistic pictorial space based on the development of a geometrically-coherent linear perspective; rather, that this particular characteristic, primarily associated with Florentine art from the 1420s onwards, should not be considered an exclusive criterion for identifying ‘renaissance’ art.

Notwithstanding, I’m pleased to see that Ing. Saetti relates the manifestation of this development, insofar as it appears in coins, to the art of the northern Italian courts: amongst its earliest monetary appearances is a grosso (cf. groat) of Gianfrancesco Gonzaga, Marquis of Mantua, with a reverse showing a view of the city of Mantua and the reliquary containing the blood of Christ in the church of Sant’Andrea, CNI 11-18.18 Saetti notes another significant step forwards in the depiction of space in the coinage of Ferrara under Ercole I d’Este in the early 1490s, in a series of coins that include the testone with the Hydra, CNI 19-21, and another testone showing a rider on horseback, right arm extended (CNI 24-29),19 before going on to provide a detailed analysis of the subtle variations in the depiction of space on the reverse of Alfonso’s coin with the beardless Duke on the obverse and Christ and the Pharisee’s agent on the reverse, familiar to us by now as a double ducat, a silver five-soldi piece, and their copper proof (CNI 3-6).20